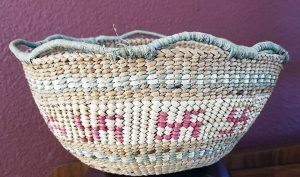 The Pelican Rapids Press published a column a couple weeks ago about the “ominous” symbol that was worked into the masonry of the old school, since demolished. The brickwork, resembling the swastika that was strongly associated with the German Nazi party, was constructed in 1916, long before the Nazis took power in Germany–and eventually led to World War II. 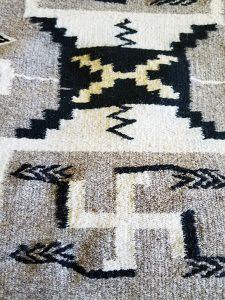 Kathryn Jensen Collins, from Richland, Washington, sent the Press a couple of images of Native American cultures incorporating a “swastika-like” image into their artwork.

“The swastika symbol was used in Native American cultures. I am not completely trusting my memory, but I believe the four arms could symbolize many things including the four seasons of weather,” wrote Jensen Collins.

“I am forwarding a photo of a basket woven by Chehalis people in the early 1900s along with a photo of a Navajo weaving which is also from that time period…From what I understand Hitler did fully understand that it was a spiritual symbol but chose to use it for his evil purposes.”