One of largest ethnic groups concerned that they could be associated with violence that has occurred elsewhere, said Ayan Ahmed

It was about Black Lives, but noticeably absent from most of the demonstrations in Pelican Rapids last week was the community’s black population.

Of course, our Somali citizens “matter”—just like our Hispanics and Norwegians.
Why was the Somali community largely absent from the day-long demonstration?
Well, I sought an answer from one of the warmest, friendliest, most articulate folks around: Ayan Ahmed. A resident since 2012, Ayan joined the demonstration Friday afternoon—smiling and waving to every car that passed by.

“They were afraid if they came, they would be associated with the violence that has happened in other places,” said Ayan, who said she “loves doing things like this and being part of the community.”

Her Somali friends and family were simply reluctant to put themselves—and the community—in a position where there could be a perception that Somalis were causing trouble. “We live here peacefully,” said Ayan.

In fact, as the demonstration was breaking up about 4:30 p.m. Friday, Ayan politely called for attention, and thanked the crowd for the peaceful event. She further explained why the Somali community was reluctant to join.

Ayan just graduated from Minnesota State University-Moorhead last spring, and she hopes she is able to stay in Pelican and work early childhood programs. She was a student teacher at Viking Elementary School in the spring, which sadly was impacted by the COVID-19 outbreak.

Ayan loves to engage with people, and learn from them. “ People always learn from each other.”

“This is a very diverse, loving community,” said Ayan—who is unabashedly proud of her hometown: Pelican Rapids, USA. 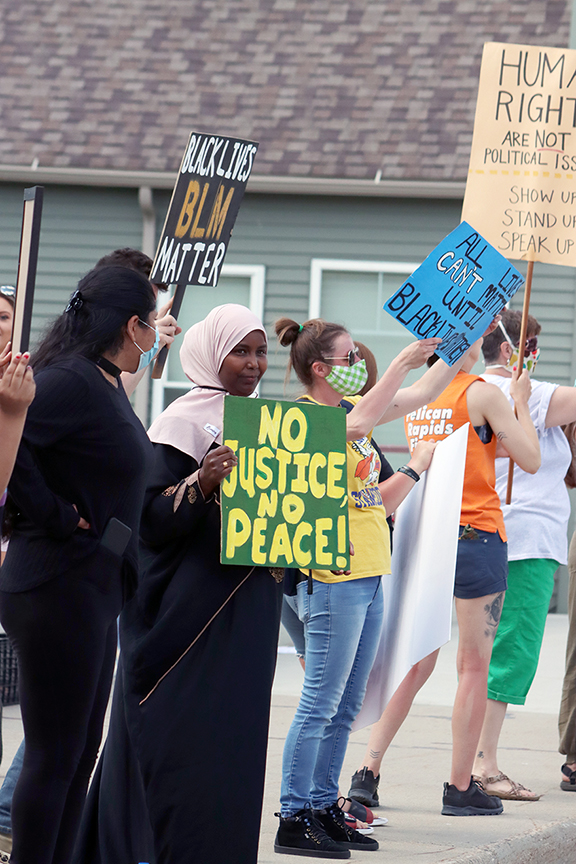