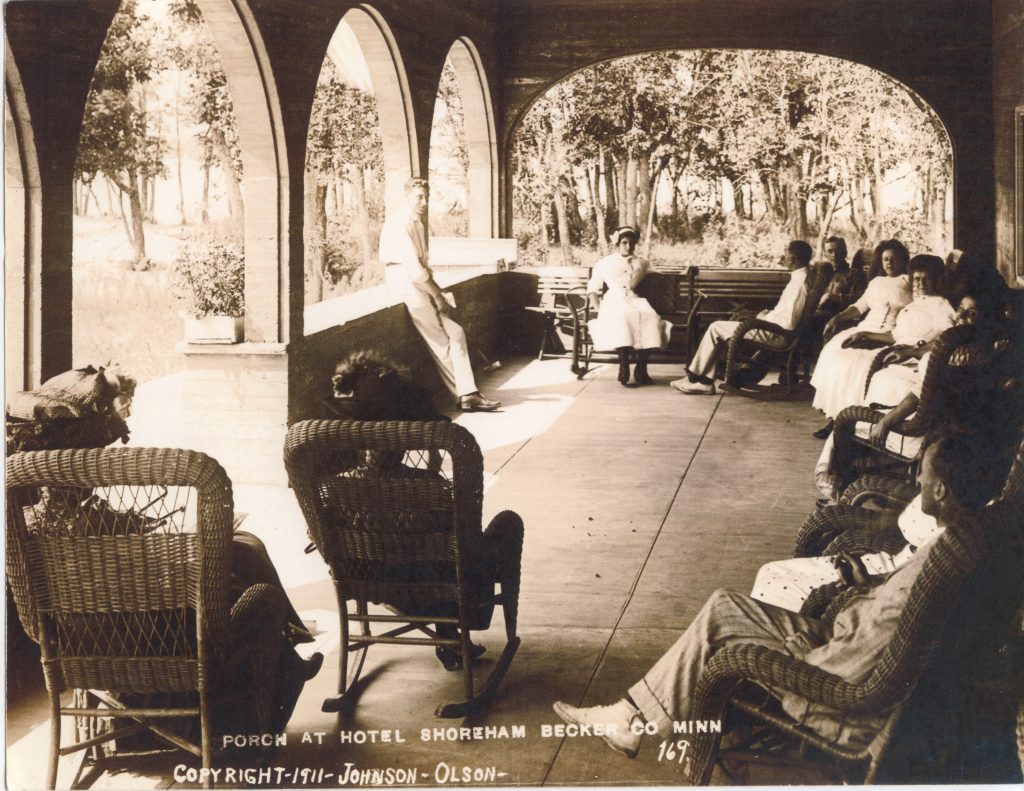 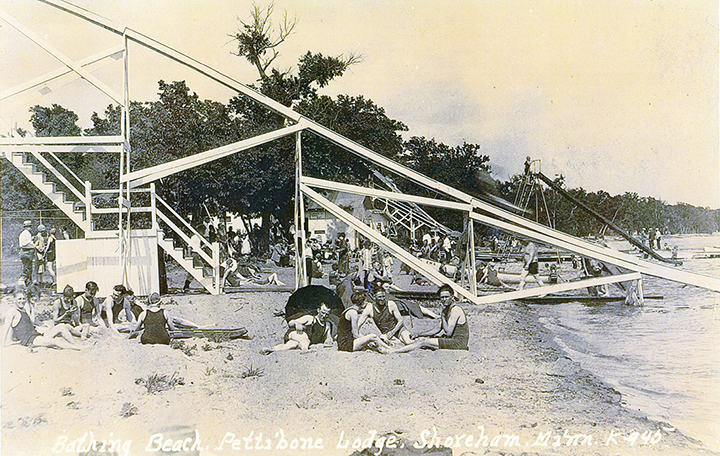 G. T. Pettibone, proprietor of Shoreham on this side of Detroit (Lakes), was shot in the stomach Saturday night by Hjalmer Bjorge and quite seriously wounded.

It seems Bjorge’s wife was employed at Shoreham, and he came from his home in Detroit to see her. He asked Mr. Pettibone to show him to Mrs. Bjorge’s room. Pettibone said he did not know where it was, and Bjorge, who was under the influence of liquor, cursed him and finally went up to him and pressed a .38 calibre revolver against Mr. Pettibone’s stomach and fired. He fired a second shot which did not take effect, and then an office clerk knocked him down by striking him with a chair.

Pettibone is expected to recover. Bjorge was taken to jail, and while there, he tried to commit suicide by cutting his jugular vein, but his act was discovered in time to save his life. Bjorge and his wife had been separated for two years or more.

Water safety and swimming instruction will begin in the Pelican Rapids area on Monday, August 4th, when the first class will be held at Prairie Lake. Emerson Mistelske of Vergas, who taught here last year and who has been teaching swimming at the University of Minnesota this year, will be in charge of the class. The local Jaycees are sponsoring the Prairie Lake class, and Al Orsund, the local chairman, will give information regarding registration and other matters.

Instruction will be given at four other beaches, and people of all ages are urged to enroll in the class which best suits their convenience as to time and place.

August 11-16, three classes will be held at the following places: Crystal-Lida, Dunvilla, and  Pelican Lake, and August 18-23 at Oak Lodge, Lake Lida. A special effort is being made to interest young people from 4-H clubs and farm groups as well as those in the towns of the county.

The water safety program is one of the biggest projects of the Otter Tail Chapter and one of the most expensive. It has for its objective the teaching of skills and giving information which will make recreation at our beautiful lakes more pleasurable and less hazardous.

Otter Tail County classes will be held at 25 beaches; the Pelican community is favored with five classes. Let us show our appreciation by early and large enrollment.

Some twenty-five years of effort apparently reached a head Tuesday evening when the village council voted to spend $9,000 for the acquisition of land for an airstrip.

The action came on the heels of a special Chamber of Commerce meeting at which it was agreed that the Chamber would raise the additional $9,000 needed for the site, a farm located about five miles north of the village.

The quest for an airport to serve the Pelican Rapids area began shortly after World War II, but every time that it appeared close, an obstacle blocked progress. As Clarence W. Peterson, presiding at the Chamber meeting recalled, numerous sites around Pelican were surveyed by Department of Aeronautics engineers. The point he made was that the airport is not a new idea, but one that has been worked on in a lot of different ways by a lot of different people.

Now, Peterson said, “It is the closest the village has been to the realization of a practical solution.”

He pointed out that options are held on two available sites that better facilities are assured because of more stringent regulations, and the Department of Aeronautics assistance for land and development is at hand.

E. H. Odland, a planning engineer with the Department of Aeronautics, indicated that, in his opinion, the Department would pay 50 percent of the land acquisition cost and all of the development costs up to $50,000. Construction could start yet this year.

The action by the council means that an option secured by the Chamber on the Elmer Tingelstad farm will be exercised. The farm, located along County Road 9 about 5 miles north of the village, contains 240 acres of land. The option price is $36,000. Fifty percent of the price will be reimbursed to the village by the Department of Aeronautics, with the other fifty percent divided equally by the Chamber of Commerce and the village.

Development costs of the 3400-foot grass strip runway will be borne by the Department of Aeronautics, which is supported by aircraft registration fees, aviation fuel tax, and other non-revenue sources.

After 34 years of custodial work in the Pelican Rapids school system, Gordon Scott says he’s tired of cleaning and ready to enjoy retirement.

So far, retirement means getting back to his rural roots by paying more attention to the garden and yard.

“I’m a country boy at heart,” he explained, pointing out that he was raised on a farm near his rural home south of Pelican Rapids.

He and his wife Norma have a large yard with a garden capable of feeding more than just the two of them. They also raised chickens this summer.

Scott says he didn’t intend to spend most of his adult life pushing a broom and polishing floors.

After working for two local businesses, he decided to pursue the custodian job at the school in the summer of 1963 since it offered good benefits.

“I was only going to have this job until something better came along,” he said.

Obviously, that didn’t happen, and by the time he opted for early retirement this spring, he had become one of the most senior staff members. Only Bev Olander, who also retired from her elementary teaching job in June, was here when Scott started working for the district.

As a custodian, Scott can remember particularly tough cleaning jobs like the time a fire in a bathroom wastebasket set off the sprinkler system. “We couldn’t turn it off,” he said. “What a mess – water everywhere.”

Other messy jobs included cleaning up after kids who broke into the home-ec room and made a mess with eggs and fire extinguishers.

While he won’t miss the cleaning, Scott will miss his job.

“I’ll miss the people I worked with … and most of the kids,” he commented.

Along with the gardening, Scott says he’s keeping busy this summer babysitting his son’s children three times a week and baking. Baking is one of his favorite hobbies.

“This summer, I’ve got all kinds of things to do,” said Scott, surveying his yard and garden. “I’m a little apprehensive about the winter.”