So…just how much does a giant pelican weigh?

The city is advertising for bids for what could be one of the weirder moving jobs in area history.

“The World’s Largest Pelican” needs to get the heck out of the way for the Pelican River restoration project and dam removal this fall to spring.

“Pelican Pete” is now deemed “historic.”  All local eyes—plus those of Minnesota state historical preservation officials—will be focused on this spectacle.   He may not look like it, but Pete is a delicate bird—a steel frame covered with plaster and webbed feet embedded in a concrete pad.

We reported recently that Pelican Pete’s weight was “lost to history.”

One newspaper account suggested that 120 bags of plaster was mixed for the Pelican’s exterior shell.  Add to that the weight of the steel frame.  Blacksmiths Anton and Ted Resset are long gone.  Also gone is plaster man Alvin Anderson, who, according to the Press at the time, “did a magnificent job of plastering the giant bird into final shape” back in 1957.

These expert local craftsmen took their trade secrets to the grave, as far as we know. 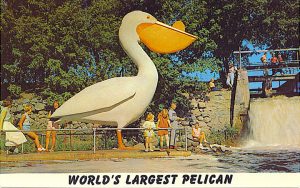 Harold did some preliminary work on the equation.  A bag of cement weighs 94 pounds.  Multiply that and you get 11,280 pounds.

Five bags would mix up about five cubic yards of product, Harold figured.

Another internet source stated, “as a general rule, we estimate plaster to weigh about 11 pounds per square foot.”  But we really don’t know Pelican Pete’s total square footage.

Harold is no doubt on the right track.

But he was a social studies teacher.  I’m a newspaper guy who cleverly avoided mentally strenuous stuff like algebra, calculus, and such.

So, I think we need technical guidance from somebody skilled in voodoo, the occult, and the “black arts…you know….those mathematician-engineer-science types.

And, a concrete guy would be helpful, like local mason Blake Melland, Harold suggested.

At this stage, we’re not venturing an estimate.

But we’re inviting readers to “weigh in” on this question.

Send your estimate, with of course, all the appropriate footnotes and documentation, to Louis Hoglund, managing editor: news@pelicanrapidspress.com

There’s no prize for this contest.  To tell you the truth, we would have no idea how to determine the winner.

But look at it this way: You might play a role in preserving the history of the “World’s Largest Pelican.”