From My VIEW POINT: by Louis Hoglund, Managing Editor

Or…with a little imagination, it could be the perfect bridge for Pelican Rapids. And a historic backdrop for Pelican Pete.

Built not long after the civil war, the “Kern Bridge” in southeastern Minnesota is the last of its kind in the state, and probably the entire nation.   It is believed to be the oldest bridge left standing in Minnesota.

And Pelican Rapids could acquire it — almost for free.

The “single-span, wrought iron, bowstring arch” design is considered something of an architectural wonder, and has been listed on the National Registrar of Historic Places  for at least 30 years.

Owned by Mankato Township, it has spanned the LeSuer River since 1873.

One of the serious hang-ups with the removal of the Pelican Rapids City Dam is that–when the dam goes, so goes the walkway from the south to the north side of the river.   The DNR river restoration program won’t cover the cost of a  replacement bridge.

But, there is reportedly up to $1.2 million in federal funds available to relocate, install and refurbish of the bridge.

The bridge is expected to be dismantled–section by section, rivet by rivet–at the end of this summer.  So serious about the historic relevance, the Minnesota Department of Transportation is expected to spend $340,000 in the dismantling process alone.

The bridge will be  put into storage  this year, and efforts will start to find a new home for it as a pedestrian bridge.

Why not re-purpose the bridge as a pedestrian passage across the Pelican River?

With the historic Kern bridge, Pelican Rapids would have two of the most distinctive bridges in the entire state–with the Rotary Club’s famous “Suspension Bridge” also on the landscape, connecting Peterson and Sherin parks to the east.

Built for the horse and buggy era, the Kern bridge really is wider than we need–at 15 feet.

Based on my highly scientific measurement–walking about 80 paces, and multiplying that by three–the Kern Bridge would stretch roughy from the Pelican Post Office parking lot to the landscaped riverside park area to the north.

Now, those who have experience with government projects of this kind know full well that it is wise contain your enthusiasm. These are seldom simple and easy.

Bringing the Brooklyn Bridge (in a sense) to Pelican Rapids is a long shot.

But is it totally unrealistic? 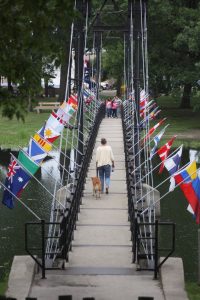 The bridge will end up somewhere. The timing is almost perfect, because the Pelican dam removal and restoration will somewhat coincide, as far as the timeline.

As long as the bridge sections are being loaded up for transport–why not just haul the freight a few hours northwest, to Pelican Rapids?

We called Lisa Bigham, of the Mankato area Minnesota Department of Transportation office.

“We haven’t found the perfect place for it,” said Bigham.

She was quoted in the Mankato Free Press: “… if it goes somewhere else in the state, that would be OK, too.”

North Mankato has expressed an interest for a city a park area.

Bigham acknowledged that a location like Mankato, near its original site, would earn some points based on history, locality and geography.

However, Lisa’s ears perked up when I explained that the Pelican location–behind the “World’s Largest Pelican” is one of the most photographed roadside attractions in the state of Minnesota.

Further, the location at the juncture of two well-traveled state highways, 108 and 59, also intrigued her.  The fact that Pelican is a recreation-tourism area, in a county with 1,000 lakes, is also a selling point.

While Pelican is several counties away from its origin, locating the Kern bridge here would meet another important set of criteria: A high profile location, with high visibility and a prominent public display.

A few other selling points:

• The Pelican site is literally a few dozen paces from Highway 59 and Highway 108, and the historic Pelican Rapids downtown business district.

• The location is viewed from the back door of one of  Minnesota’s officially designated Explore Minnesota Visitor Centers.  This center is located in the “Historic City Hall building” which is more than a century old.   There is a large back deck, which directly views our pelican statue, the dam site, and the bridge.

• Otter Tail County and multiple agencies are working on a cross-Otter Tail County recreational trail.  Pelican Rapids will be the westward starting point—to Maplewood State Park and on to Perham.  A unique bike-pedestrian bridge will become a key component to the planning for what will become a  major state recreational trail system. Yet another reason that the Pelican Rapids location would be very visible and high profile.

Once relocated, the bridge would be renominated to the National Registrar of Historic sites–even though it is not at the original location.

Adding a historic monument like the Kern bridge would become a national showcase for not only dam removal and river restoration, but also a remarkable “starting gate” for the state’s newest recreational trail system.