Editor’s note: With the heating—and holiday–seasons here, many readers fondly remember their young days. Tom Albright, Pelican native and frequent contributor to the Pelican Press, recalled his memories of waking early for school—as father stoked up the old coal and wood-burning furnaces of a bygone era. Following is Albright’s account of a typical school day in the cold of winter, back in the 1950s. 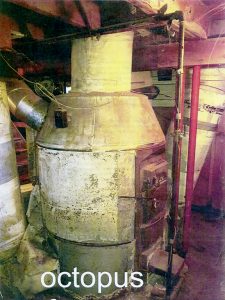 Before turning in to sleep each night—Father needed to step down, into the underground. He traveled into the old basement of rock cement walls. Passing the round-tub Maytag ringer washer, then stepping across the cover of the deep holed dark root cellar.

He reached for his trusted scoop shovel, using the blade, lifting the latch. It opened the burning hot door of the big “Octopus Monster.” He then scooped a big heaping amount of black coal pellets, from the nearby storage bin. Sometimes it was not coal but instead, firewood.. Whatever he had— he fed the devouring creature.

In the bitter cold Minnesota winters, a chill would cruelly awaken him around 3 a.m. Once again he trekked down below. This time he reached for his iron poker. He then stroked the fames to a blue glow, stirring the pile inside of ashes. More coal or firewood he added, stopping only when the smoke started surrounding on the outsides.

At 6 a.m. is when the real activity happens!

He forges upstairs. At the second floor landing. His arm opens a door, reaching inside, he flips the wall switch. A sudden intense glare hits my dream, and sleepy eyes.

My first waking thought was: “Oh God no, it can’t be this time already.”

Second thought: “I am in deep trouble. Why did I watch TV for 3 hours instead of studying for today’s test?”

He knew us. The flip on the light switch would not be enough . So he would sing the opener verse of one of these following two songs:

• Sometimes, it was the Mills Brothers Lazybones “Lazybones, sleepin in the sun. How do expect to get your days work done?” “Time to get up for school.”

At this point, a swear word was sometimes muttered. Not me—but from one of my two older brothers.

Then it was getting dressed, coming down the stairs, breakfast, then off to school. Before he himself could leave for work. His final duty he needed to carry out—stoke the furnace, adding coal or wood for mother, who was still asleep in bed.

After I graduated and moved out, and away, I heard things got a lot easier for father. He purchased a new natural gas burning furnace, ductwork, and automated control Honeywell thermostat.

As to the wake ups. All he needed to do was speak this command to our family poodle: “Apollo Go! Go wake up Jimmy and Chuck.” Apollo would then zoom up the stairs. Jumping on each of their beds. They then awakened to pitter-patter paws bouncing across their chest.

After getting dressed they would step down the staircase. To the smell of bacon frying, and father’s scrambled eggs.

Why does the youngest always have it the easiest?

Another ‘Mystery Tool’ for your consideration 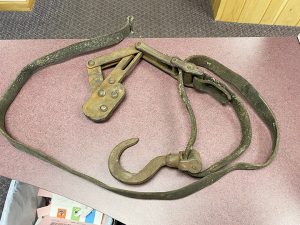 Another Mystery Tool landed on our desk at Pelican Rapids Press. This one has a large hook, and a ratchet device. The tool was brought to the Press by Selvin Brenden.

It is hard to explain, but feel free to stop by the Pelican Rapids Press office to examine the device.

If any reader can identify, or explain how they operated, email Louis Hoglund, managing editor, Pelican Rapids Press:

“Mystery Tool” is an occasional feature in the Pelican Rapids Press.

We had several readers report correctly on the Mystery Tool published earlier in November. 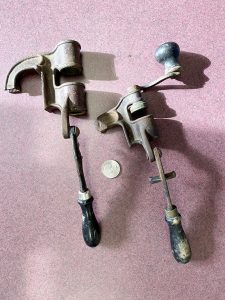 These gadgets showed up in a dusty toolbox owned by Gene Strand, Pelican Rapids, right.

The items were brought to the Pelican Rapids Press by his father-in-law Darrel Forsgren.

These tools, pictured here, are used for loading shotgun shells.