I think the best way to put the election this year is fear.

I know Roosevelt said, “The only thing we have to fear, is fear itself.” But, he wasn’t alive during this election cycle.

He didn’t live in an era where things are totally fabricated during the political process–and no one seems to notice.  Seriously, has anyone ever looked at their Facebook feed and asked if the people who write the garbage that filled the pages is on drugs? When someone posts something from the Conservative Tribune or Occupy Democrats, do they really think they are getting an unbiased view? 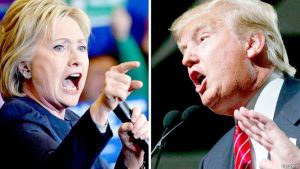 Yet, there it is.

People I consider to be intelligent are posting stuff that is flat out wrong.  Headlines that read, “Hillary Clinton Found in Bed with Bigfoot to Secure the Sasquatch Vote…Bill Shot Video!” rock my news feed. And, the best argument against the headline is, “Everyone Knows Bigfoot is Republican!” I’ll hear this stuff mentioned out in public while ordering a Big Mac.

There are a couple of reasons I bring this up.  One, I don’t think that people realize that many online sites only look at the views from one side–it is not actual news.  Real news includes things that we don’t actually like.  Sure, news reports that fit your views feel good, but so does farting in the bathtub, but we don’t share that on Facebook.

The other reason I bring this up, is because a lot of these sites are filled with lies, or at worst bad writing.  How is bad writing worse, you might ask?

Well, this requires a new paragraph to explain.  In an article on a so called unbiased website, I found the following quote, “According to alleged sex offender Donald Trump…” The phrase alleged sex offender was not needed, it only served to drive a stake in Donald Trump.  The words were put in to bring about an emotional response.  There is no need to put it in the article at all.

Every time the words “crooked Hillary” are used in an article it makes my skin crawl, and they do it for the same reason that the term alleged sex offender does.

They have no place in anything that looks like fact.  That is the writer’s bias slipping through.  At an entry level college class we learn that writing, at least neutral writing, should be free of these words.  The only reason they are put in, is to play puppet with the reader’s mind and force them to think in the way that the writer wants them to think.

Now, with that out of the way let’s look at the candidates.

…Okay, I would rather not look at the candidates.

We have two professional scam artists in our presidential candidates.

Everything that I have ever seen wrong in American politics has come to life.  This election is like watching creeping death.  I don’t know what is going to die, but I have a feeling that it will be a great-unsung death.

We appear to be forced to choose between two individuals who we wouldn’t trust to run an undocumented rummage sale, much less the entire country.  With these choices, the best we can do is  use something other than Facebook to educate ourselves on the issues that this country faces.