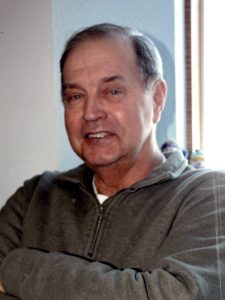 On August 18, 1974, Earl married Sondra Rae Alberty at United Methodist Church in Perham, MN. For many years, Earl farmed on the family farm and the Alberty farm near Star Lake, Dent, MN. In addition to farming, Earl worked at Henry Building Systems for a couple years, Egge Construction for 15 years, MVM Contracting in Fargo, ND, for 2 years and the city of Pelican Rapids.

Earl was a lifetime member of Central Lutheran Church and very active in various church activities. He enjoyed visiting with friends and family and could tell you the history of most local families. He liked watching the Pelican Rapids Vikings basketball and football teams. He enjoyed his annual trips to the Minnesota State Fair. He also took pleasure in square dancing. Earl was known for his good sense of humor. In honor of Earl, please wear orange and black to the visitation and the funeral service.

He is preceded in death by his parents, wife Sondra, sister Janet Doty, and in-laws Raymond and Coral Alberty.

Online memories and condolences may be shared at www.larsonfuneralpelicanrapids.com