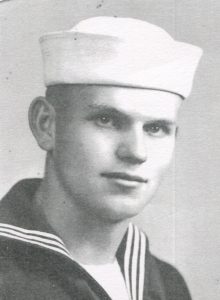 His daughter, Bonnie Onnen, is a familiar face in Pelican Rapids–a longtime newspaper carrier, and also when she is on duty at Larry’s Super Market and Southtown Convenience Store.

Ralph served our country during WWII in the U.S. Navy, honorably discharged in November 1945 as a 1st Class Carpenter’s Mate in San Pedro, California.

He owned a dairy farm in Minnesota, and retired from US Motors in Prescott; after that he was the caretaker at the Gun Club in Prescott Valley and a greeter at Wal-Mart. He traveled in his travel trailer for several years before settling down in Cottonwood.

He was very family oriented to his children, brother, sisters, grandchildren and great-children.

Ralph was an active member of the American Legion and enjoyed dancing.