Lillian (Brown) Christianson, 101, died Thursday, May 2, 2019 at Pelican Valley Nursing Home, Pelican Rapids, MN.  Lillian was born August 30, 1917 to Peter and Emelie (Odahl) Brown in Dane Prairie Township.  She grew up on the family farm and attended country school through the 8th grade. 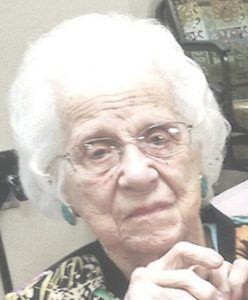 She met her future husband, Clark Christianson in a snow storm near Foxhome, MN and they married in 1943. She was employed at the State Hospital in Fergus Falls during the war. When Clark returned from World War II, they moved to Fargo, ND where they lived until 1961, then moved to Moorhead, MN.  They were married for 66 years and were the proud parents of two children.  Lillian was a hard working, happy woman who enjoyed dancing, craft work, traveling, playing cards and laughter.  She spent many weekends camping and fishing with her husband and family.  She was an excellent cook, baker, gardener and was most famous for her light as feathers rolls and dill pickles, affectionately known as “Lill’s Dills”.  Lillian was very active in her church, Community of Christ and spent hours volunteering at the Sons of Norway.

Special thanks to ALL the staff at Pelican Valley Senior Living and Hospice of the Red River Valley for the loving care given to Lillian.

Services and burial will be held in July at Clitherall, MN.