Lawrence (Larry, Lar, LJ, The Guy on the Dime) Joseph Myers passed away on Tuesday, November 29, 2016, after his intense battle with cancer.

There will be a gathering of family and friends at Parkway Funeral Service, 2330 Tyler Parkway, Bismarck, on Wednesday, December 7, from 5-7 p.m.

Larry was born on November 21, 1937, to Eugene Myers and Phillipine (Barth) in Mandan, ND. His first job was working for Northern 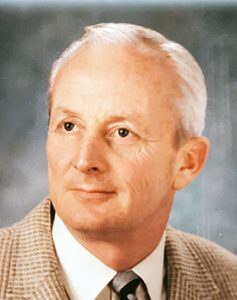 Pacific Railroad while still in high school and joined the army right after. Throughout his working years, he was a Salesman/Manager for Northwestern Bell, Vice President for Fronteer Directory and later an Entrepreneur, starting his own successful Telecommunications business. He was an excellent athlete; playing football, basketball, track & field and tennis. After the army, he was recruited by the University of Oklahoma on a football scholarship. However, he missed his life in ND, so after a short period there; he took a football scholarship with the University of ND (Fighting Sioux).

On August 29, 1959, he and Sally Crouse married and started their family in Mandan/Bismarck. They spent 23 years together. On November 27, 1987, he married Ruth Olson. He had a great life with his “Ruthie.” They spent 29 wonderful years together. Retirement did not slow Larry down at all. He continued shooting, playing softball, and golfing with his many friends. Some of his favorite trips later in life were with his daughters, shooting various weapons at Horsehead Lake. He was a lover of the land and was a Johnny Appleseed, planting more than 50,000 trees in his lifetime. Larry is known for his quick wit, sense of humor and his ability to draw a crowd. He was awesome at telling jokes and his stories were legendary. Larry was always in charge and had a plan in whatever he did. He loved to cook and was known for his beer batter and sausage making parties. He would measure everything out to the second, whether it was sitting down to eat (We’re eating in 2 minutes and 42 seconds.”) or traveling somewhere. He loved giving nicknames and every loved-one had one or two. He could always be found wearing a white t-shirt and Levi jeans. He was old school and always said “If you’re not going to do it right, don’t do it at all!” He didn’t like computers, cell phones (magic boxes) or any electronic “gadgets;” the TV remote was definitely his nemesis. He was incredible with numbers and was also a ballistics expert; probably reloading over 100,000 shells “Larry loads” in his lifetime. Several times he was called upon by the court system to testify as a ballistics witness. Larry was a formidable opponent in every situation and could sometimes be “a little” intense. However, once you were a trusted friend, you were family. He had many life-long friends and he loved and cherished all of you. He also had a soft side and loved teasing his grandkids giving them “knuckle sandwiches” or telling them they could “play in the water, but don’t get wet”. Larry was an excellent marksman and avid hunter. Throughout his lifetime, he won 44 State Championships in shooting (14 Trap, 17 Skeet, and 13 Sporting Clays). He was inducted into the ND Trapshooting Hall of Fame in 1988. He was the president of the ND State Trapshooting Association for 2 years and elected president of the Midwest International Trap Shooting Association for 2 years (3 provinces and 7 states). He helped establish the Bismarck Capital City Gun Club. He also shot in the US Open 3 times. Larry loved the outdoors and spent much of his time hunting, planting trees, having bonfires, or just taking in the beauty of North Dakota with friends and family. We think God broke the mold after He created Larry, because he was so unique and special.

Larry was preceded in death by his parents; and his brothers, Col. James Myers and Thomas Myers.

In lieu of flowers, please make a donation to the Bismarck-Mandan Elks #1199 in honor of Larry Myers. His type “A” personality could be tough as nails, but he was deeply loved and will be missed by many. He was downright fun to be with! Dad, we are so proud of who you were and we love you so much. This “Belt” is for You!