Howard was born in Sioux Falls SD to Jens and Hilda (Brodalen) Jensen. He graduated from Pelican Rapids HS, and 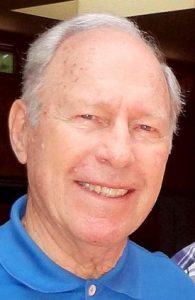 served in the USAAF. Howard attended the University of Minnesota and graduated with a degree in Electrical Engineering. He began his career in Jackson, Michigan at Consumers Power Co. and retired in 1987 as Manager of Electrical Transmission and Distribution. Howard served as President of the Michigan Electrical Assoc.; Chairman of the Electrical Research Task Force of the Electrical Power Research Institute; District Chairman, Boy Scouts of America; council member, Immanuel Lutheran Church, Jackson; Kiwanis member, 55yrs.; Grand Traverse County School Board member, Traverse City. Howard was an avid golfer at the Country Club of Jackson where he often played with special friend, Russell Youngdahl. He enjoyed life at Lake LeAnn especially the annual 4th of July family reunion. He also enjoyed traveling around the world.

Howard was a devoted husband, a loving dad and a good friend. After retiring Howard and Bette spent winters in Orlando before settling there in 2016.

He was preceded in death by his brother Warren Jensen, his sister Lucille Kaiser and his brothers-in-law Donald Nelson and Wallace Arneson.

Services will be announced at a later date.

Memorials may be made to the Alzheimer’s Association.