Donald “Donny” William Schultz, 93, of Rothsay passed away on Tuesday, November 1, 2016, at PioneerCare in Fergus Falls. 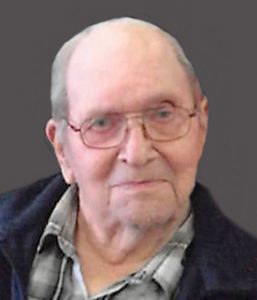 Don was born on July 15, 1923, the oldest of 5 sons born to William and Lily (Hendricksen) Schultz in Rothsay. He attended school in Rothsay and graduated in 1940 as a member of the first graduating class from Rothsay High School.  He was also on the first baseball team in Rothsay and his love of baseball continued through watching the Minnesota Twins.

During and after high school, Don helped on the family farm and in 1945 he entered the Merchant Marines.  Upon discharge he returned to Rothsay and began his career at Erickson-Hellickson-Vye Lumber Company.  He continued there for 30 plus years as a manager.

On January 17, 1948, Don married Doris Hauger in Rothsay.  At the time of Doris’s death in 2012, they had been married for 64 years. They lived in Rothsay for their entire married life and raised their children there.

He began playing the fiddle at the age of 12 and continued throughout his life, which brought him and others decades of enjoyment. It brought him great pleasure playing with the Don Glen Dale and Ken Baker Bands.  He and his wife loved to go fishing, snowmobiling and dancing.  He loved working in places where he could visit with people.  He enjoyed teaching his grandsons to fish for sunnies, drive a car and shoot. He would tell them endless stories off the top of his head.  He loved to be a prankster.  Spending time with his grandchildren and great-grandchildren were the highlight of any day.

In the late 1970s Don went to work as the manager of the Rothsay Municipal Liquor Store, where he was known as “C-Gar”.  He also was the gaming manager for the Rothsay Lions, where he received the Melvin Jones Fellowship Award. Don eventually went back to the lumber yard, then known as the “Store Front.”

He was a member of New Life Lutheran Church in Rothsay, Rothsay Lions, Rothsay Senior Citizens and PARTNERS.

A special thank you to the wonderful healthcare providers and staff at Mill Street Residence and PioneerCare, who he came to know as good friends.