Dale Vernon was born March 2, 1935 on the family farm near Pelican Rapids, MN, to Wilbert and Birdie 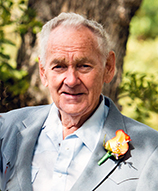 (Rice) Pierce. When Dale was one-year old his mother, Birdie, died and later Wilbert married Elsie Schmedeberg. He was baptized and confirmed in Lake Lida near Pelican Rapids. He attended country school then Pelican Rapids High School. Dale served in the U.S. Navy from 1952-1956 during the Korean War.

Dale was a member of the Pelican Rapids V.F.W. Post #5252 and a lifetime member of NRA where he taught gun training. He enjoyed fishing, trapping and hunting, especially duck season.

Interment: Private Services will be held at a later date and time at Pleasant Hill Cemetery, Dent, Minnesota.

Online memories and condolences may be shared at www.larsonfuneralpelicanrapids.com.