DNR explains how puzzle of funding, timing, left us with a trail to nowhere — and how they plan to finish it

Members of the Friends of Maplewood were all ears on August 30 as DNR District 1 Supervisor of Parks and Trails, Shawn Donais, outlined what has been done so far — and what needs completing before construction can begin on the portion of the Heart of Lakes Trail that will wind through Maplewood State Park.

Donais laid out the timeline going all the way back to the late 90s when the idea of the trail was first proposed, including the 1998 Maplewood State Park Master Plan, which called for connecting future paved trails with the park.

But it wasn’t until 2013 that a trail advisory committee formed, leading to the eventual development of the Otter Tail County Master Trail Plan in 2016.

With funding secured through grants and bonds, Otter Tail County and the Minnesota DNR entered into a cooperative agreement to develop plans for the Maplewood State park trail segment in 2020. Things started moving more quickly after funding was in place, with the county starting trail construction along Hwy 34 in 2021 and the Pelican Rapids to Maplewood and Maplewood to Perham trails in 2022.

The Pelican Rapids portion of the trail was completed in August, with the Perham portion expected to be completed by November 2022. But county funding and state funding are two different beasts, and while the county was able to jump into construction, the state and the DNR need to finish planning and fund the construction of the trail through the park.

State House Representative Jordan Rasmusson kept his promise to sponsor a bonding bill to provide funding to complete the trail through Maplewood, but the legislature failed to pass a bonding bill during the most recent session.

Rasmusson assured the Friends of Maplewood that funding for the trail was included in the bill, but Governor Walz will need to call a special session to pass the legislation.

However, the county has applied for funds through the Legislative-Citizen Commission on Minnesota Resources and expects to secure some money to continue the project.

Many trail paths being considered

The first draft of the bike trail through Maplewood considered a loop around the park that followed along the road in hopes that it would lessen the impact on park resources while providing an in-park loop option to cyclists.

However, this plan proved problematic as it would require severe cuts and fills into the topography to offer allowable slopes for a bike trail and safety and maintenance issues arising from running a paved bike trail next to a gravel road.

Donair shared five alternative routes being analyzed and considered by the DNR at the Friends of Maplewood meeting. The trail that seems to have the most significant potential so far is a trail that enters from Isle View Drive near the southwest side of the park and weaves its way around and between hills and wetlands to exit the northeast corner near Beers Lake Road.

Maplewood trail is cooperative effort between the county, DNR

Donair described the relationship between the DNR and Otter Tail County like one between a general contractor and a homeowner. The county has done much of the critical work, like completing wetland, biological, and archaeology surveys. The county has also contracted with an engineering firm to perform pre-design and impact analyses of preferred routes. The DNR then uses their expertise to analyze and, much like a homeowner, looks over a floor plan, finds problem areas, and works with the contractor to solve them.

When asked, Donair encouraged folks to reach out to the county with concerns and suggestions related to any amenities like parking lots or porta-potties that could be installed along the trail, as they will be responsible for maintenance and updates to it. So far, there are no plans to include them, but public input is essential to the trail’s success.

More information and updates about the Heart of Lakes Trail and its future path through Maplewood can be found online at https://ottertailcountymn.us/project/perham-to-pelican-rapids-trail/. 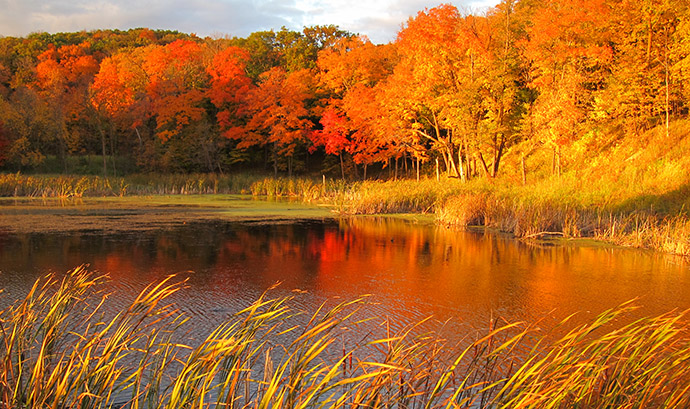