A retro-debate over the Pelican-Perham recreational trail, which is now in its final stages and largely a non-issue at this point, also surfaced.

Even nut-and-bolt county-level topics like roads, bridges, culverts, and ditches were discussed.

With five filing for the District 2 seat, historically speaking, 2022 may be the most hotly contested county board election in Otter Tail history.

An unusual forum, the session was hosted by, essentially, a “special interest group.” The “Conservative Coalition of Otter Tail County” was the host. The crowd of about 60 was polite, the discussion civil—but there was little doubt that county board incumbent Wayne Johnson was the target for these conservatives, several of whom have been frequent critics of Johnson and the county board in general. Conservative social media posts have taken aim at Johnson, including a few snide, name-calling passages.

Johnson knew this, and despite some trepidation, he showed up.

Which is more than can be said for candidate Dean A. Anderson, who didn’t even attend—nor has he been heard from since he filed for the position.

Two of the candidates, Dora Township’s Dave Helgerson and Star Lake Township’s Tammy Ziegler, appeared ideologically aligned with the Conservative Coalition. Prior to the session, Helgerson freely volunteered his belief that the 2020 presidential election was stolen. “I couldn’t believe it,” said Helgerson in an interview, “it was an attack on liberty…I felt I had to do something, rather than just sit back.” He decided to get involved at the county board level.

Meanwhile, Ziegler is running against “foolish spending,” “lower taxes,” and “the basic ten”—meaning the Bible’s Ten Commandments. “We have to take back our country and keep our freedoms,” said Ziegler.

Jeff Gontarek, Friberg Township, who ran for the county seat in 2018, positioned himself somewhat as an independent voice. He noted that he was not a member of the Conservative Coalition.

Forum was held outside District 2; most of those attending were not West Otter Tail voters

The forum, and most of the questioning, came from a decidedly conservative vantage point. Only about a dozen of those attending the forum were residents and voters in West Otter Tail’s District 2, which includes Pelican Rapids, Vergas, Erhard, Elizabeth, and the Lida-Pelican-Lizzie-Crystal-Franklin-Star Lakes area.

Consequently, a wide majority of the audience was there as a show of conservative solidarity—with no direct connection to District 2.

Held at the Thumper Pond resort convention room, there was criticism that the forum wasn’t located within county District 2— closer to voters—such as the Vergas Community Center or the Pelican school.

Housing generated some of the most revealing discussions at the forum. One of the questions posed involved the dissolving of the Housing and Redevelopment Authority and transferring authority to the county’s Community Development Agency. The question implied that the move transferred power to “unelected liberals.”

Johnson bristled at the notion, because several of the CDA board members are hardly “leftists,” but owners and managers of some of the county’s larger companies—such as Ripley’s Inc., Erhard, and Vector Windows, Fergus Falls.

Big Build defended as initiative to bring housing to county

To date, the Big Build has been a factor in 230 new homes, plus two apartment complexes. A recent deal to bring a 60-unit complex to New York Mills will bring housing to a town with Brunswick-Lund boat manufacturing facility, which Johnson said is in “desparate” need of workforce. The “Big Build” also helped facilitate a 32-unit complex in Pelican Rapids, which also has severe workforce and housing issues connected to the Jennie-O West Central Turkeys plant.

The Conservative Coalition has also contended the “Big Build” could open the door to more government spending and subsidized housing.

The Pelican and New York Mills apartments were “market rate,” not low income “government” housing, responded Johnson. “Big Build” goal is to facilitate housing, mostly for middle-income families, he said. There are nearly 1,400 jobs, right now, waiting to be filled in Otter Tail —and housing is a piece of the workforce puzzle, contends Johnson.

Candidate Gontarek has been a critic of “Big Build.” He questioned the 5,000 home goal, contending that “when you do the math, there’s not 5,000 jobs” coming to Otter Tail. Many of the unfilled jobs are in the service sector, with incomes that wouldn’t support a $300,000 to $400,000 home anyway, said Gontarek, who has been in real estate for eight years. The premise of “Big Build” was flawed, because the projections were partly based on lower wage, temporary, seasonal jobs.

“There are a lot of questions before we go further,” said Gontarek.

Helgerson recalled the meeting where housing was restructured with community development, stating that there were up to 60 people at the meeting—all in opposition—many of them loosely affiliated with the Conservative Coalition.

“The citizens were not listened to,” said Helgerson.

Still, Johnson argued that the housing incentives are based on abatements and incentives that build tax base, but don’t directly impact taxpayers.

Helgerson contended that housing policy was being set by non-elected, appointed people; and expressed concern about impacts on private property rights.

Both Helgerson and Ziegler expressed concerns frequently during the night about the county accepting state and federal money, such as federal housing grants, because of the “strings” attached.

On the issue of elected versus appointed, Johnson noted that the county has been involved in HRA housing since 1972. Most local governments rely on appointed officials, including zoning panels, because logistically, “you can’t elect everybody to do everything,” from an operational standpoint.

Trimming the size of government was a repeating theme during the question-answer forum.

“Growth of government” is a concern, said candidate Helgerson, who claimed that Otter Tail County has 82 more employees than ten years ago.

“It seems like every time there is a presentation asking for more staff, there is always a 5-0 board vote to approve additional staff,” said Helgerson.

“Top heavy” is how candidate Jeff Gontarek described county government, stating that a “tremendous amount” of higher position staff has been hired—and then assistants are hired for them.

“We can save some money there,” said Gontarek. “We need a strong county government, but not a top-heavy government.” He added that higher-level administration tend to “make decisions and develop ideas for which they’re not held accountable.”

The constant pursuit of grants should be monitored, because the “strings attached” to many of them can be costly, said Ziegler.

“It’s OK not to accept every grant just because the money is there,” said Helgerson.

As the seated county board member, Johnson tended to find himself and the present board on the defensive. State and federal money is usually tied to mandates and requirements. The county board “is an instrument of the state.” Mandates will be required, “whether we like them or not,” so a big part of the county board’s role is to manage state-federal requirements––which will be there with or without the state funding.

Despite concerns about the growth of county government, the annual budget has grown an average of only about 3 percent.

The Pelican-Maplewood-Perham recreational trail was discussed at some length. The topic was a moot point, in a sense, because the project is proceeding. But the discussion did reveal different viewpoints.

Helgerson, living in Otter Tail for only the past five years, missed much of the early planning—but he was initially in favor. But since, he was disappointed with the land acquisition process for trail right of way. “I don’t like eminent domain,” said Helgerson. He further questioned whether an adequate feasibility study was conducted.

“I feel it (the trail) was pushed through,” said Helgerson.

“I’m completely against the whole thing and I’ll say that until the day is done,” said Ziegler. “I don’t believe the trail will be used as much as they say it will.”

Gontarek said the trail will be a reality, so there isn’t much that can be done. He did express concerns about how it was laid out, and the pending paths through Maplewood State Park. “Parts of that park haven’t been touched in hundreds of years,” said Gontarek, noting concerns about wetlands, habitat, and natural environments

Gontarek drove the trail, and with a background in criminal matters as a former probation official with Otter Tail County, he stressed the importance of safety as the trail becomes used. The long stretches in isolated areas are a concern, said Gontarek. “Criminals and pedophiles pick up on that quickly.”

Johnson contends the trail was sufficiently researched, and there was a feasibility study. He defended the project, noting about 70 percent of the cost was through bonding, sales tax, and lottery money—which the state collects and distributes back to local governments. Otter Tail generates more than $3 million annually alone in sales tax revenue captured for Legacy funding. “It stays at the state, unless we apply for it,” said Johnson.

On the subject of eminent domain to acquire right of way, Johnson said there were only about three properties on the entire west stretch of the trail that required eminent domain actions. “I understand people’s concerns, but eminent domain is a tool we have…we use eminent domain for road projects too,” said Johnson. He also strongly objected to descriptions of the county “taking” land, because the landowners received fair market price based on appraisals.

Regarding concerns about carving a path through Maplewood, Johnson responded that the park was established in the late 1950s, so there are many township roads that existed before it became a state park. The trail will, for the most part, use those existing roads, rather than further disturb natural lands.

Conflict of interest with wastewater, septic issues denied by Johnson

Johnson responded to a question that was directed at his septic installation business. Some critics have contended he has a conflict of interest when voting on shoreland and wastewater treatment topics.

“All 87 counties in Minnesota have adopted septic system codes consistent with the DNR and other agencies…the code in Otter Tail is also statewide,” said Johnson, adding that there is “no secret language” that benefitted his business. In fact, he said he recused himself from voting on several septic-wastewater-related matters.

Johnson was the only candidate that made a point on lake and river water quality. “We have to protect the lakes,” said Johnson. “Otter Tail County wouldn’t be much if the lakes are green and icky.” He stressed the need to maintain water quality for generations to come.

Gun rights and the Second Amendment were discussed, and the current board has been criticized by the Conservative Coalition for not adopting a “sanctuary county” measure that is intended to make a pro-gun statement.

“I very much support the Second Ammendment,” said Helgerson, who contends that “60 percent of counties” have some kind of protective language. “It is out there, so this isn’t something novel,” said Helgerson.

Gontarek said he would support some form of Second Amendment Sanctuary measure.

Johnson said that the “Constitution stands on its own…we took an oath to uphold the Constitution, and we support all 27 amendments.” 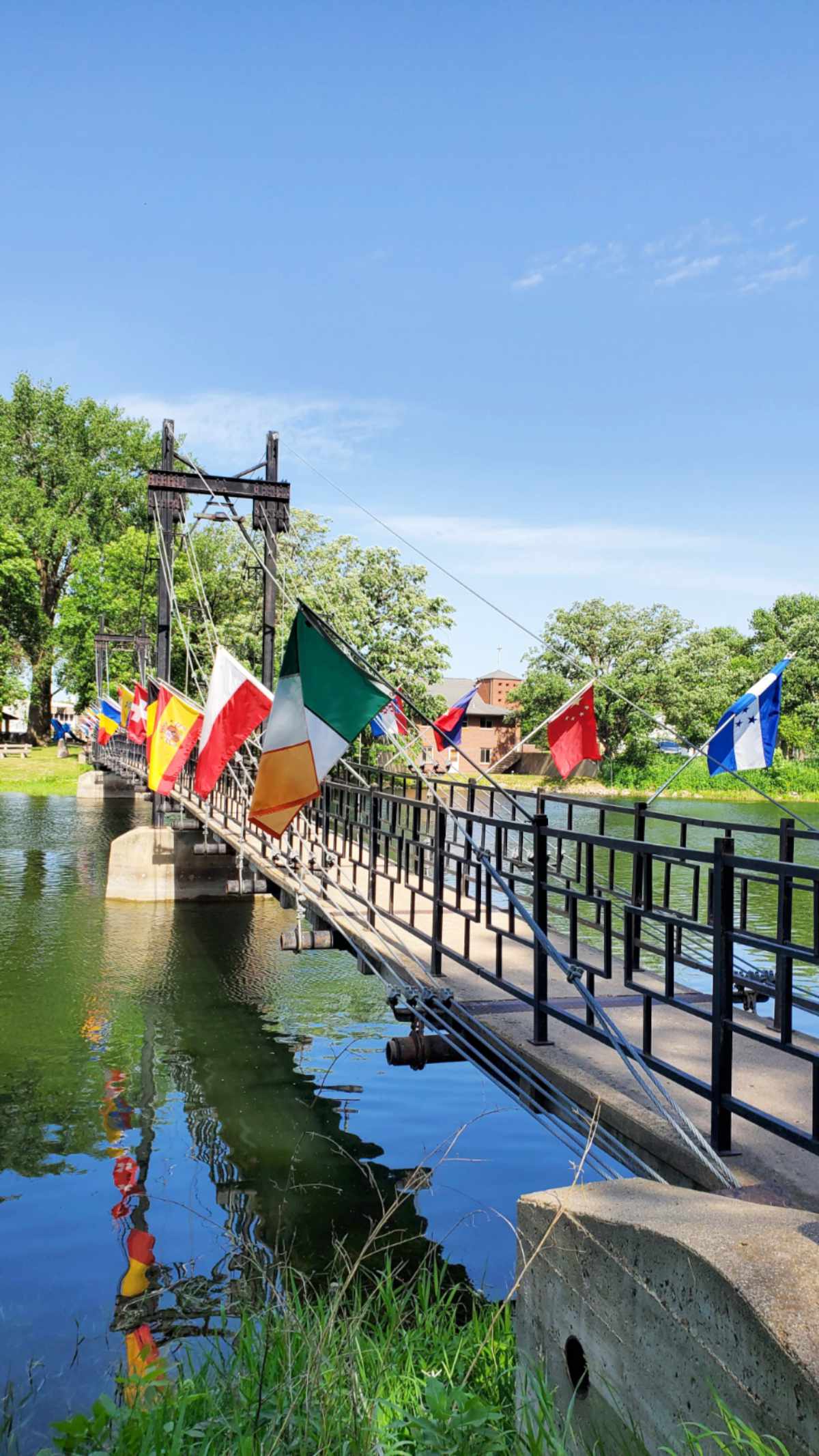