The “Heart of the Lakes Trail” from Pelican Rapids to Perham is expected to be completed this fall.

With one notable missing link: A connection through Maplewood State Park.

The trail from Pelican will stop at the western border of the approximate 11,000-acre park. But a connection through the park to its northern border is targeted for the 2023 construction season, said Kevin Fellbaum, Otter Tail County parks and trails director.

“There’s a litany of considerations with a trail through the park,” said Fellbaum. From sensitive wetlands to archeology to restored prairie to old-growth forest—these are some of the considerations in carving a path through a state park.

“The DNR is a large organization with a lot of interests and individuals involved,” said Fellbaum. “They will need to choose a corridor that will satisfy all the departments within the DNR.”

Design work is in progress for the Maplewood section. The trail connection will bisect the park, eventually connecting to Highway 108—past the park ranger station, said Fellbaum.

“We did a walk through, trying to button down a way to snake through the park,” he noted.

The Heart of the Lakes Trail is a 10-foot wide, 32-mile long, multi-use recreational trail connecting Perham and Pelican Rapids via Maplewood.

Most of the trail will be within road right-of-way, but there were several parcels that needed to be acquired—some through eminent domain proceedings.

All the property that needed to be purchased has been completed, and there was some resistance by some property owners.

Funding for the trail has been provided by state bonding, local matching funds, and grants from the Legislative-Citizen Commission on Minnesota Resources and Greater Minnesota Regional Parks and Trails.

An overview of the funding to construct five segments of trail:

• East segment, from Perham: Mostly funded by the Minnesota and federal Departments of Transportation, as the trail corridor followed the County Highway 34 reconstruction.

• Maplewood Park segment: To date, state bonding money for engineering and design has totaled $275,000. Construction costs within Maplewood boundaries will be incurred by the DNR.

All the blacktop is projected to be completed by this fall, with the exception of the Maplewood interior connections. “October is the plan, but if we keep getting blasts of rain like we have, that won’t help,” said Fellbaum.

Otter Tail County, the Cities of Perham and Pelican Rapids, the Minnesota Department of Natural Resources, the West Central Initiative, and the PartnerSHIP4Health worked together to develop the Heart of the Lakes Regional Trail Master Plan.

With Pelican Rapids poised to become the “gateway” to the Heart of the Lakes Trail, the city council voted to join the “Greater Minnesota Parks and Trails” organization.

Pelican will be one of more than 130 government and business members of the organization. The GMPT advocates for parks and trails and helps secure funding for park and trail enhancements.

Pelican Rapids is situated as not only a hub for the new recreational trail from Pelican to Maplewood to Perham but it is also included in a long-distance trail from North Dakota through the state of Minnesota.

“It’s always good to have the name of our town on maps,” said Councilman Curt Markgraf. Pelican is sure to be listed on promotional materials as a central trail connection to several future trail networks.

GMPT also assisted with the funding of the Pelican-Perham trail, with about $1.8 million toward the project.

Long-range trail plans include a southerly connection to connect Maplewood and the Heart of the Lakes Trail to Fergus Falls.

“We are really looking forward to seeing the trail segments come together. The trail is an exciting feature to enhance the outdoor recreational opportunities in the county,” said Fellbaum.

In addition to health and community benefits, the Heart of the Lakes Trail will also offer opportunities for economic growth and development.

The construction of the McDonald and Silent Lake segments of the Heart of the Lakes Regional Trail is this summer.

The McDonald Lake segment connects the East segment at County Highway 34 and runs along 440th Street, where it connects with the East Silent Lake segment. This segment will take bicyclists to the entry of Maplewood. 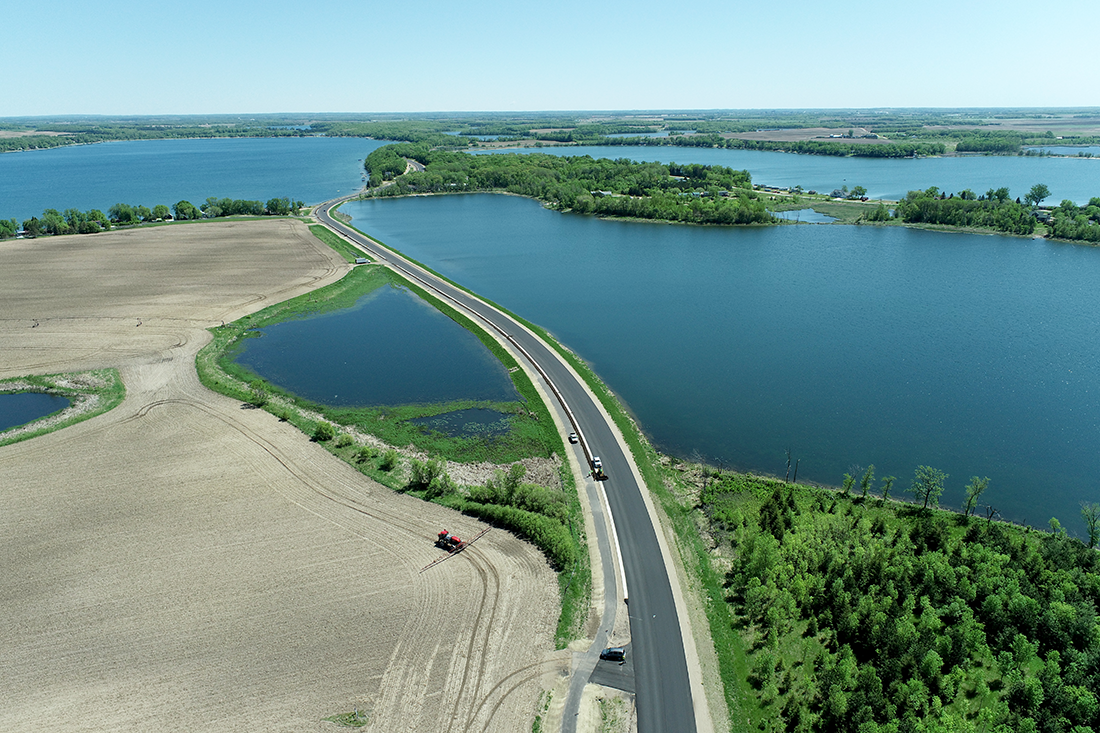