Pelican Rapids can boast the most fleet-footed principal in Otter Tail County—maybe the entire state.

That will give her a big advantage when she hits the ground running this fall.

Accustomed—and accomplished, when it comes to running—Laura Januszewski trotted to a dozen All-State honors at Burnsville High School. At North Dakota State University, she was a two-time All American—and an NCAA Woman of the Year Semi-Finalist. And was an Olympic-caliber 800-meter competitor—qualifying for the U.S. Olympic Trials in 2012.

“Running has been part of my life for more than 20 years. Growing up, I never thought it would be the sport that would stick with me, but it has been the reason for so many of the wonderful connections that I have made with some of the greatest people that I know,” said Januszewski, who will be running the grade 7-12 Pelican Rapids High School beginning this school year.

She still loves to compete, “but I find great joy in watching others succeed and my hope has always been to carry some of the lessons I learned and the experiences I had as an athlete onto those that I coach today and in the future.”

As recently as July 2, she was on the run—and so were her husband Jake and their five children. Januszewski was one of the race organizers for the Pelican Pete 5K. In fact, her husband Jake took second at the fun run, with Laura third, crossing the finish line about two minutes later. Meanwhile, all five of the Januszewski youngsters jaunted in the Pelican Pete one-mile kids event.

Husband Jake, who assists with the Pelican cross country and track teams, is equally accomplished. A Class A state runner for the Perham Yellowjackets, he went on in college to set an NDSU record in the 300-meter steeplechase event.

“(Jake) became a training partner for me as I competed for the next five years,” said Laura. The couple met as track and field athletes at NDSU. “Ten years and five kids later, it’s harder for us to squeeze in runs together, but we joke that we have dates every Sunday when we go for our long runs together. An hour and a half of uninterrupted conversation on rolling gravel roads!”

From business-marketing to education

While running has been inseparable from their lives, her career path was toward business, marketing, and management—which was her degree at NDSU. Education came later.

Januszewski worked for six years at Hotel Donaldson (2009 to 2015), which was a dynamic redeveloped lodging and restaurant establishment in downtown Fargo. One of her unusual projects was the widely publicized breast cancer campaign “Bras on Broadway,” which raised more than a half million dollars.

Her path to education was launched at Lake Park-Audubon, where she taught business and coached from 2013-2018. From there, she coached at Concordia College-Moorhead, to 2021.

In between, she earned further degrees at Valley City State University and, most recently, a master’s degree in educational leadership at Minnesota State University-Moorhead.

Sights set on soccer as a Burnsville High School Blazer, Laura Januszewski’s coach convinced her to run track as a “side gig.” She never stopped moving, earning a state championship in the 400m relay.

• Laura played both soccer and ran track at NDSU, focusing entirely on running after her first year.

• She ended her career at NDSU in 2009 as a two-time All-American in the 800m, multiple-time conference champion, three-time school record holder, NCAA Runner Up in the 800m, and an NCAA Woman of the Year Semi-Finalist.

• After graduating from NDSU, Laura trained for three years in pursuit of breaking the elusive 2:00 barrier in the 800m. “I ended my career running 2:01.05, but had the experiences of a lifetime.”

• She spent three summers in Europe training and racing, qualifying for 10 USA National Championships; she finished 5th at the 2009 USA Outdoor Championships.

• Before coming to Pelican Rapids, she coached cross country and track and field for three years at Concordia College.

• She coached at Lake Park-Audubon for three years and track and field for four years. “I remember many years of trying to beat extremely talented Viking teams on the course and on the track,” said Laura.

“I didn’t love distance running when I first started, but I believed in what my coach, Ryun Godfrey, said and trusted the process of becoming better. I think that’s an important lesson for any person. Whoever said, “Good things come to those that wait,” was a wise soul.

I might add, “Good things come to those that wait, train, and trust.” It took me many miles, many races, many successes, and many failures, but good things did come.” 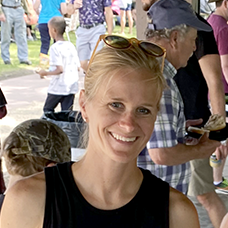 She will bring a strong background in technology to her new role. Last year, she served her first year in Pelican as a technology integrationist. Tech roles will be included in her principal job description.

She looks forward to “continuing our students’ successes and will strive to continue the positive relationships, rigorous learning, and the incredible Viking environment that encourages our students to celebrate their unique strengths.”

She is keenly aware of the value of leadership in academics and in the athletic arena.

“I truly believe everybody needs somebody in their life that is willing to challenge them to try something new. Luckily, I’ve had quite a few people give me that push in my career, and I hope to do that for others in my coaching and also in my new role as principal.