Proposal is sensitive, with diamond on Pelican school grounds–but board appears receptive

Having a beer at the ball park is as American as apple pie, hot dogs, Babe Ruth and the stars and stripes. 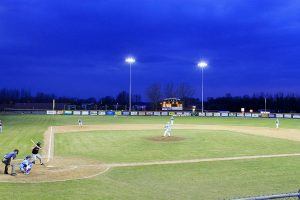 School board members were receptive, though cautious.

Despite administrative concerns, the elected board appeared willing to experiment for the summer 2019 season–though an official vote isn’t expected until mid-May.

Serving beer at school baseball facilities, though by no means common, does occur elsewhere in the state, noted Guler.

But it comes with a range of conditions, stipulations and legal framework.

Paynesville, for example, has beer-serving approval.  But there, the local baseball association signs a seasonal “lease” on the property. The baseball group virtually “owns” the facility for the season–including all maintenance, plus insurance costs and assuming all liabilities.

The Pelican proposal would be somewhat similar, explained Johnson.

“We’ve made a tremendous amount of improvements, and we’ve had a good working relationship with the school,” said Johnson.  The association has been in existence for 20 years, and has raised much of the money, as well as labor, that brought extensive baseball field improvements–including lights for night games.

The Pelican baseball association is not abundant in cash and resources, so they view beer sales as a modest revenue stream. Under the proposal, beer would be served at about seven or eight regular home Pelican Lakers baseball games. The biggest potential pay-off are the amateur tournaments, which have high attendance.

Though school administrators are wary, the final decision rests with the board.

Superintendent Randi Anderson acknowledged that she is not personally in favor–nor are other area school superintendents she surveyed–she also recognized the valuable relationship between the baseball association and the school. In addition to the extensive physical improvements of the park, the organization manages virtually all of the youth baseball-softball programs.

Board member Greg Larson was the first to speak up with an endorsement.

“I think the association is looking tonight for a general show of support…whether beer sales are within the board’s comfort zone–or way outside our comfort zone,” said  Larson. “I’m comfortable.”

He described the baseball group as a successful “well-oiled, structured” organization.

Board member Brittany Dokken, noting that her father, Phil Stotesbury, was an active amateur ballplayer in Pelican, said she didn’t tend to view the ballpark as a “school facility” in the summer, when school’s not in session. This non-school-year plan might make beer serving more palatable to the public.

Less tangible than the liabilities, risks and legal matters is the “image” of serving beer on school grounds, noted Superintendent Randi Anderson. Conversely, she noted that she “also sees this as an opportunity to bring people into the community.” She also acknowledged the value the association has brought to the district, through ballpark improvements and youth sports.

“I see the potential in continuing the collaboration…we wouldn’t have the field we do without the association,” said Anderson, even though she had personal misgivings about the proposal. “This is a unique situation, and we recognize that.”

Activities director Derrick Nelson surveyed about 20 area schools.  None of them which play on school-owned property, allow beer sales.

Perham, for example, is fortunate in having two full ball diamonds.  Beer is not allowed on the school-owned field; though beer is available–with some limits and restrictions–at the city owned ballpark.

Typically, beer is not served at under age 18 baseball events around the state. However, beer was available at several of the recent, annual state American Legion tournaments. Pelican hosted a Legion tourney last summer, but did not offer beer.

Board member Brenda Olson said she had an “open mind” on the Pelican proposal.

Regarding the “image” concerns, board member Larson did not believe that the beer-serving would have a “significant impact” because it would not be conducted during the school year.

Through signage, proper restrictions and operations, the beer sales could be effectively disassociated from the school district, noted Larson.

A formal vote on the proposal is expected this month by the Pelican Rapids School Board.

These are among the conditions suggested if beer were served at the Pelican Rapids school-owned baseball park.

• Beer would only be sold at adult amateur games, including larger-scale regional tournaments in late July-August.

• No beer at youth and American Legion games, because the athletes are underage.

•  School will be officially out of session for the summer during baseball season.

•The baseball association is responsible for clean-up and security.

• Beer would be restricted to assigned areas in the ball park.

• Beer would not be stored at the concessions stand, but removed to an off-site location between games.

• The association would purchase liability insurance.  However, the school would also be obligated to add additional coverage as well.