Chemical treatments to control curly-leaf pondweed are being planned for application by the Lake Lida Property Owners Association.

Algae growth in the summer of 2018, especially on South Lida, was among the worst ever experienced, according to some Lida residents.

“Nearly impossible to eradicate,” is how curly-leaf was described by Phil Oswald, RMB labs, Detroit Lakes, who will be working  with the Pelican Lake Chain and Cormorant as well.

“We can really only manage what already exists,” said Oswald.  “Controlling the spread is very difficult once it is in a lake.”

“Pea soup” is how one property owner described the color of a collected  sample of the water.

“We’ve lived here for 40 years, I noticed last year it seemed really bad, but this year it came really early,” stated a Stony Bar area resident, at a property owners meeting. “We decided to try North Lida, but couldn’t even make it there because the algae plugged up my motor it started to overheat. Boat was just covered in slime. I’ve never seen anything like this. Didn’t dare touch it.” 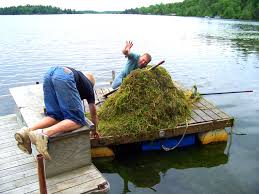 The summer of 2018 was the most challenging summer on South Lida in many years. Plant growth, zebra mussels, climate change, algae blooms, beavers, and prolific Canada geese have all contributed to the problems, noted Linda Kohls, in notes from the association.

The non-native invasive pond leaf is, in part, the culprit, and the treatment is aimed at controlling the weed.

Summarizing the biology of the non-native plant, Oswald, RMB labs,  said it begins growing early in the year–even under the ice.  It dies off early in the summer, but meanwhile it crowds out native aquatic plants, said Oswald. The dead vegetation feeds algae growth–which is what Lida experienced heavily last year.

As a threatening species, curly-leaf pondweed is rivaling zebra mussels–but has not grabbed media attention to that extent.

The Cormorant chain of lakes has been battling the weed for a decade. 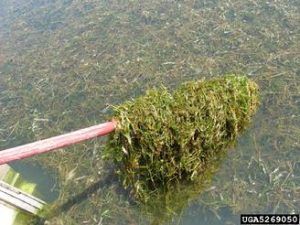 Pelican Lake has worked closely with the DNR for the past 15 years to improve the Curly Leaf Pondweed situation, said Pelican Group of Lakes Improvement District chairman Jay Elshaug.

“This was primarily due to a large algal bloom,” said Hilber.  The question is what caused it.  “There are multiple, and debatable, answers to that.  One of the underlying causes (and the one that we could most easily address as an organization) was Curly-leaf pondweed.” 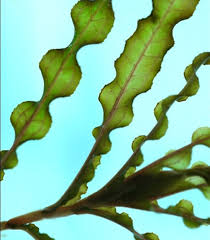 “We will likely fall in the $450-500 per acre range based on my discussions with Clarke,” said Hilber. “The amount of area we treat will be dictated by what the survey finds…(the Lida Association) budgeted $15-20,000 for treatment. With luck we won’t need to spend all of that on treatment.”

Herbicide treatments of Curly-leaf on South Lake Lida are planned in late May or early June.

Public notices are being published in the Pelican Rapids Press. The first appeared in the April 3 edition, another running this week on page 11.

Proposed areas for treatment will be determined based on results of an aquatic plant survey to be done on South Lake Lida in early May. Details on the survey will be found on the Lida association’s  webpage: http://www.lakelida.com/news/.

The Lida property owners organization is required to notify landowners of proposed treatments, offering them an opportunity to request that treatment not be done in waters adjacent to their property. This is defined as waters within 150 feet of the shore lake-ward between property lines. The herbicide treatment project aims to reduce aquatic invasive species populations which interfere with navigation, impair recreational activities, and cause harm to native plant populations.

Landowner’s may exercise their right to “opt out” of the treatment  near their property by notifying the LLPOA in writing.

“Never seen it this bad, usually it starts in August, this year  (2018) it started in June. In the calm bays (Curly Leaf Pond Weed) started a couple of years ago. It’s gotten progressively worse. Couldn’t swim on the fourth of July.”

Invasive species cause recreational, economic and ecological damage—changing how residents and visitors use and enjoy Minnesota waters. Curly-leaf pondweed impacts:

• Midsummer die-offs can litter the shoreline with dead plants.