Shuttered for more than a year, there will now be room at the Inn for guests and visitors to the Pelican Rapids lakes area.

The Inn at Dunvilla is expecting to re-open in mid-May, confirmed new owner Paul Schletter.

A familiar face will return to the Inn, Bob Kohler, who was part of the management team under the previous owners. Kohler was named general manager, and several previous employees may also return, said Schletter, a Chanhassan businessman and lake area seasonal resident.

“We’re involved in a number of investments,” said Schletter, a Clarissa native.  “We looked into this and loved the opportunity.”

Schletter owns a company specializing in managing parking, and their clients include the city of Fargo–with which they’ve partnered since 2015.

The lodging facility, located in the center of the Pelican, Lizzie, Lida lakes area, will undergo a slight name change: Lakes Inn at Dunvilla.  Signage, and paving the parking lot are among the first orders of business, said Schletter.

Opened fully in August of 2016, the 30-room hotel experienced solid weekend bookings for most of its history. The Inn’s proximity to the Barn at Dunvilla event center, with its steady schedule of weddings and events, is a cooperative arrangement that will continue, said Schletter.

“We’ve connected with the Barn, as well as all the event centers in the area,” noted Schletter.  “We’ll be working in tandem with all of them.  Schletter said the Dunvilla Inn is “one of the most beautiful hotels within a 50 mile radius.” 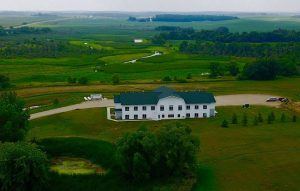 “The new owners will really embrace the hospitality industry in the area,” said Donald Johns, chief executive officer of Minnesota National Banks.  Johns was especially encouraged that Schletter and his associates are “hands-on, engaged owners.”

The new owners have “clear deed” to the property and “all is good,” said Johns. The ba   nk closed the Inn in spring 2018, rather than assume the risks and liabilities of running a lodging operation.  The Inn was closed for one full summer, but will reopen in enough time to capture the warm-weather tourism-recreational season this sumner.

Weekday vacancies, especially during the “off season” from fall to spring, were a financial drain on the operation. Schletter would like to be open year-round, but he is anticipating May to October.  November to April will likely be weekends only, at least for the first year.

The hotel will be operated totally independent, with no affiliation with a larger hotel operation.  However, Schletter said that they are working with outside vendors that will help book lodging and market to business travelers.

“We’re just too small to afford the costs and obligations of an affiliation with a national company,” said Schletter.

The purchase price was not disclosed, but the two main commercial creditors, Minnesota National and the Axia construction firm that built the hotel, were holding about $1.4 million in debt connected to the hotel.

Schletter purchased the Inn with no encumbrances connected to the previous owners, John and Linda Grefsrud.

“We purchased the hotel at a very good price and we will be able to sustain the business model indefinitely,” said Schletter.  He also emphasized that he intends to “maintain it as a premiere hotel for the area.”

The purchase also included 12 acres of undeveloped land, which “comes with other opportunities,” though there are no immediate plans for further development at the site, he said.

The hotel expects to employ 15 to 20 employees, full and part time, said Schletter.

Original owners and builders of the Inn, John and Linda Grefsrud closed the hotel in March of 2018, facing stifling debt and cash flow difficulties.

The Inn was widely heralded as a much needed  addition to the travel-tourism sector–especially with the decline in family operated resorts and fewer lodging options. The Grefsruds were enthusiastic promotors when the Inn opened in 2016. But the Inn closed in less than two years from its initial opening, when Minnesota National Bank assumed the property and began seeking a buyer.

The Inn was promoted as a revival of Dunvilla and Dunn’s Lodge–one of the region’s earliest resorts, starting with its first cabin in 1908.

The Barn at Dunvilla  is one of the original barns of the Dunn’s Lodge era.

The Inn at Dunvilla overlooks Lake Lizzie–which is the lake that drew visitors from across the nation to Roy Dunn’s  resort.  In its glory years, Dunn’s enterprises included lodging, cabins, farm operations, golf course and the iconic Dunn’s Lodge. Though demolished in the 1980s, the distinctive southwestern architecture is well-remembered in the lakes area.

A state legislator for decades, Roy Dunn was well-connected in the Republican party–and Dunn’s Lodge hosted state and national Republican gatherings from the 1930s to 1950s.