Imagine,  comfortably seated in your living room, while Elton John plays and sings for you. 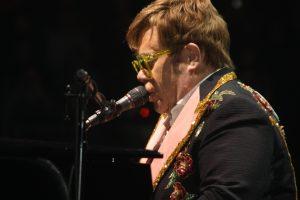 Ethen and a friend traveled to the Twin Cities for the Target Center performance of Elton John’s “Farewell” tour.  By a fortunate and unexpected twist of fate, they ended up front and center for the Feb. 21 show.

“It was almost like  Elton John was performing a private concert for us,” said Ethen.  “We were in the front row.  If I stepped over the railing, I would have been on the stage.  There was nothing between us and the piano.”

The stage level, “VIP”  seats were an odd stroke of good fortune, at a show that was totally sold out.

So close were they that one of the road crew approached Ethen, an accomplished amateur photographer, and asked him to refrain from snapping photos–because the sound of the shutter on the camera wa audible.

Ethen is an Elton John fan, and the tour is billed as his last touring show: “Farewell Yellow Brick Road.”  His friend, Roger Rutten, Alexandria, who is blind, is an even bigger fan.  In fact, said Ethen, he has duplicate copies of virtually every album released by Elton John.  He keeps one of the records un-opened, still wrapped in cellophane.

The abbreviated story:  Ethen and Rutten obtained upper level tickets, at a cost of about $680 each.  The two were strolling around the venue, checking the t-shirt and souvenir sales tables. Ethen was leading Rutten, who was carrying his cane, through the maze and the throngs.

They noticed somebody following them.

Eventually, the guy approached them and offered them “Box Seat” tickets right in front of the stage. Initially, they were skeptical–thinking it was some kind of scam.

But, they took the tickets to the entrance to the VIP section, and were given access to the seats–no questions asked.

Ethen later found out that Elton John, like many touring performers, specifies VIP tickets in their contract–which are then available for friends, families or dignitaries at each performance.  The complimentary  tickets, for example, might be presented to the governor or the mayor, or some other individual of the performer’s choosing.

Evidently, there were a few VIP tickets undistributed, so one of the concert crew members walked the concourse and hallways to give them to an unsuspecting fan.

“He followed us for quite a while, as I described t-shirts and souvenir items for Roger, since he couldn’t see,” said Ethen. “I suspect that he saw a blind fellow, using a cane, and decided that we were deserving of the tickets.”

The two fans were basically within ten feet of Elton John at various times during the concert.

“We were at stage level…virtually on the stage,” said Ethen.

The value of the VIP tickets?