Duke has been dispatched to “doggie heaven,” after serving about five years as Cormorant’s top dog. Mayor Duke, elected by landslide margins every year, was about 13 years old this year. During his illustrious career as honorary “mayor” of Cormorant Village, Duke rubbed shoulders and pressed flesh and paw with dignitaries everywhere–and attained 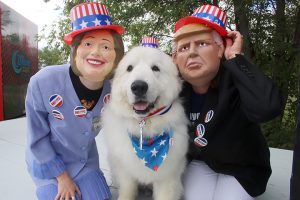 Pictured with Duke, after winning another landslide local election, are Hillary Clinton, left, and Donald Trump, after the pooch was sworn in August 20, 2016 during Cormorant Daze. It was also an election season nationwide and playing the role of the presidential candidates, Mary Rappa and Kathy Thom.

Preventing Duke from a total, unanimous landslide vote in 2016 were two ballots for an ordinary human–and one ballot cast for Lassie.

Duke’s master–or “subject,” depending on how you look at it–was David Rick, who sadly commented in one press account that Duke was like his child. The Great White Pyrenees, a familiar sight in downtown Cormorant, captured international attention when the Cormorant community elected Duke mayor as a gag. 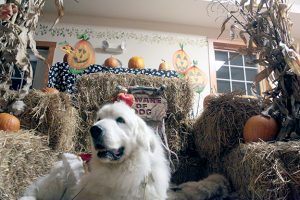 Ellie Lodin Meeting Duke, the Mayor of Cormorant was on my bucket list. Fortunately I was able to meet him and shake his paw. He was a wise Mayor and wonderful dog!

Brenda Lee Strand Will always remember his kind spirit and easy going, laid back attitude. Will be missed.

Jolene Eslinger He was a mayor for the people!!!

Cormorant’s best friend, and distinguished mayor, has passed away.

After serving from 2014 through 2018 as Cormorant’s honorary mayor, Duke the dog retired last year due to failing health in his old age. 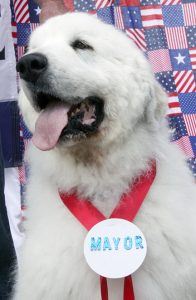 Duke came as close to any political figure to attaining world peace, as his snow white coat and friendly eyes brought a smile to millions–in international press-media reports and countless public appearances.

Duke died in the care of his Cormorant Village “subjects”–or “masters”– Dave Rick and Karen Nelson, on February 21.

Winning by landslide in tongue-in-cheek elections annually as a run-up to the August Cormorant Daze festival, Duke the dog brought international publicity to Cormorant.

A memorial for Duke is planned for March or April at the Cormorant Town Hall. Tricia Maloney, will be organizing the memorial, along with Duke’s many friends and political collaborators.  The event will possibly be during their annual community egg hunt.

The 13-year-old Great Pyrenees became the first and only mayor of Cormorant back in 2014, when he won by a landslide during a write-in campaign that charged $1 per vote.

The story of Duke appeared in the pages of national magazines, as well as countless newspapers.  He was also the subject of enumerable broadcast reports.

Duke appeared on television as a guest on Steve Harvey’s talk show as well as in the World Dog Awards.  Duke probably appeared in as many parades as the governor of Minnesota during his political tenure. 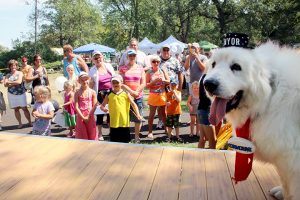 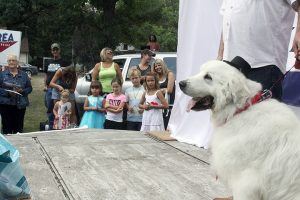 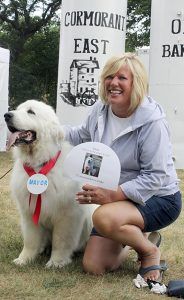