An RV campground proposal on the west side of Pelican Lake that has been on the shelf for several years is back on the table.

The redevelopment of the former Rolling Hills Golf Course into a 150 unit RV camping facility appears ready to launch, following the purchase of the 41 acre site.

“We sold the business in Texas and moved back two years ago,” said Gilbertson, who said she was confident that the development “is going to be good for everybody.”

“Walleye World” is the working title of the RV Park. JoAnn, who has a graphic arts background, has already created images for a logo.

The land was bought from Cyril Flem, who operated the Rolling Hills golf course from 1967 to 2016. Flem retained five acres for his home, on the south side of the former golf course.

In her research prior to buying the acreage, she learned that there is a three to four year waiting period for RV plots in the area–including the existing park to the north of Rolling Hills; and at Campers Cove on the Cormorant Chain. 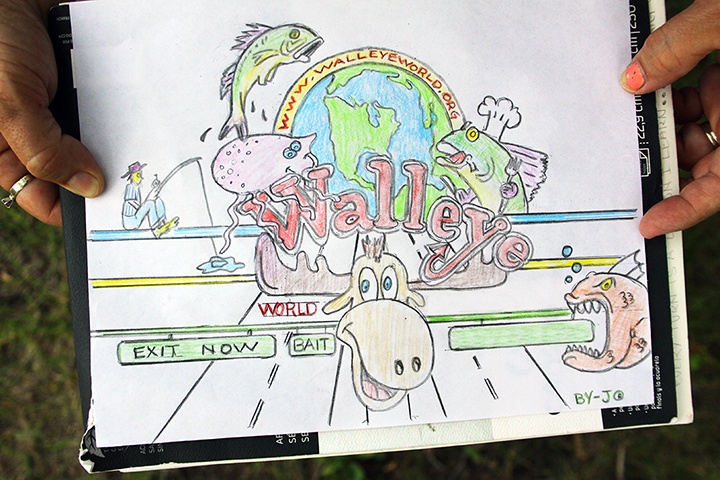 The redevelopment has been the focus of controversy for several years. Opponents of the project packed the Scambler Township Hall meeting room.  The Scambler Town Board’s Conditional Use Permit for the RV project was unsuccessfully challenged by the Pelican Lake Property Owners Association. In 2017, Otter Tail County District Court dismissed the action by the Pelican property group.

The court dismissal, in effect, cleared the way for the development–however, there was no buyer and developer to proceed with the project.

That changed in late June, with Gilbertson’s purchase of the Flem golf course property.

Gilbertson said that her development plan would essentially proceed under a phased-in timeline similar to the plan previously proposed to the Scambler Township Board. The Gilbertsons are essentially following the same site plan originally submitted by Flem.

Road work could begin within a week, said Gilbertson. The three phases are expected to proceed at a pace of 50 RV stalls per phase.

The Scambler conditional use permit, issued nearly two years ago, remains in effect, according to Sambler Township Board Chairman Dennis Carlblom.

Because the proposed park will be accessed from Otter Tail County Road 9, there are no township-administered roads involved.

As far as water wells, wastewater treatment “there are agencies above us” that will govern those permits, said Carlblom.

Road work is expected to begin by July 16.  The first occupants of the park are expected next summer, said Gilbertson.

When the project was proposed by Cyril Flem in 2014, it sparked controversy.

Views on the project were along roughly three lines:

• Many area businesses viewed additional RV capacity as brining more visitors and bolstering the summer economy–especially with the decline of the family resorts and fewer lodging options.

•  Friends of the Cyril Flem family, who believed that the Pelican Lake area golf course operator was being deprived of his opportunity to redevelop his property and ease into retirement.

The court ruling last year, which in effect upheld the Scambler Township-issued Conditional Use Permit, cleared the way for the sale of the golf course acreage to the Gilbertsons.

JoAnn is a West Fargo native, and Robin from Fargo. Robin’s background is in commercial and residential construction.

The couple were drawn back to the lakes area when their son, Dustin Gilbertson, was killed in a snowmobile accident in 2014– which enabled them to be closer to his child, who is now six.

Robin and JoAnn are also foster parents of three; an 18-month-old,  a two year old and a six year old.