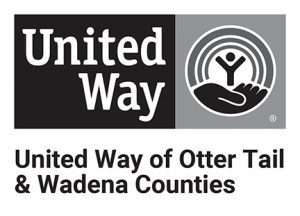 “We are very excited to provide services to our Wadena neighbors,” Executive Director, Mary Phillipe said. “I think it’s a great step for United Way. It’s going to help us grow, and when we grow, we are able to make more of an impact for people in need.”

“We have some partnerships which are based in Otter Tail County which also provide services in Wadena County,” Phillipe said. “We’ll be working on strengthening those relationships. Our combined board will be developing a new strategic plan on March 23 and focusing on needs in both counties and where we can make the largest impact with our current resources.”

“The existing Otter Tail County United Way Board and I are very excited to welcome Wadena County, and several of its existing board members, to our United Way,” United Way President Josh Heggem said. “This is an exciting opportunity that will bring with it new challenges and new inspiration, and allow us to reach an even larger population of hungry children, homeless families, people in need of mental health support systems and many others in need in both counties.”

In the past, the Wadena United Way has participated and contributed to the local school backpack project. Approximately 250 backpacks were filled with school supplies and distributed to local children before school started in the fall. Backpacks were distributed to kids in the Wadena-Deer Creek, Sebeka, Verndale, Menahga and Bertha-Hewitt school districts. Last year, the local United Way was able to donate $1,000 to assist with memberships to the Maslowski Wellness and Research Center for low-income children. The United Way has funded many other agencies over the years as well.