The 2016 Pelican Rapids Vikings football team didn’t get to celebrate any wins so they worked hard to measure improvement and progress in other ways.

“I felt we got better as the year went on. We practiced harder and played harder as our young team learned what it takes to be successful in varsity football,” said Coach Dave Haugen. 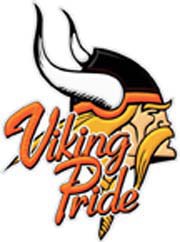 The schedule was very tough as it included 5 teams that played in section championship games.

The last two opponents in the regular season played in the state semi-finals of class 2A and 3A tournaments.

“It can be hard to notice improvement when you finish against such high level competition but there were plenty of areas that we were able to look at in terms of our execution and understanding of our assignments,” said Haugen.

“I was really proud of the way we played and practiced late in the season. The guys were willing to be coached and kept learning,” continued Haugen. “The way the team finished out the season gives us reason for optimism looking ahead to the 2017 season.”

Junior running back Carlan Haugrud led the Vikings in rushing with 460 yards on 68 carries.  He also had 4 rushing touchdowns on the season to lead in that category.

Jacob Gottenborg, junior, was the leader in every receiving category with 22 catches for 315 yards and 3 touchdowns.  Junior Quarterback, Oakley Kress, completed 31 of 80 pass attemps for 524 yards with 5 TDs and 7 interceptions.

Most Valuable Defensive Back – Matt Hanson