Hopping a bus to the pumpkin patch has been a tradition for Pelican Rapids Viking Elementary School students for several years. 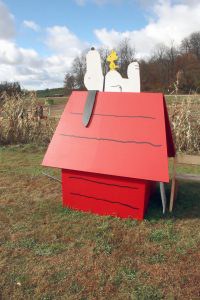 The Olson family hosted the students, and the Pelican Rapids High School student council served as “chaperones.” Students visited the petting zoo, which included burros. ­­They decorated cookies with autumn frostings and colors. They also picked a pumpkin to take home.

The corn maze, which is new this year at Thea’s, was opened up for the students to take an abbreviated walk through the maze.

Through special arrangements with a company specializing in corn mazes, the
Olsons created the maze in the form of characters from Charles Schultz’s “Peanuts” comic strip. Other features at the pumpkin patch feature the Peanuts theme, including the familiar Snoopy dog house and Lucy’s “psychiatry stand.”