This night photo of the Myher-Hagen Standard Station in Pelican Rapids was photographed in 1933. 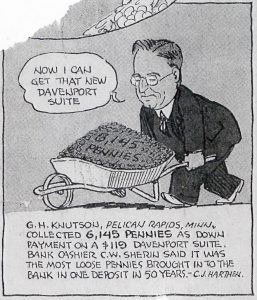 At right, this odd cartoon came across our desk.  The publication date is unknown, but it is a fair guess it was in the 1930s. We’re speculating that it appeared in one of the daily newspapers, perhaps Fargo–but more likely one of the Minneapolis or St. Paul papers of the time.  The format is similar to the old “Ripley’s Believe it or Not” illustrations that appeared in newspapers back in those years.

We’re assuming that the comic strip was regional in scope, focusing on oddities, facts and tidbits from around Minnesota or the upper midwest.

Note thaat the bank cashier was C.W. Sherin. The city park on the east side of the Pelican River and Mill Pond is named Sherin Park. Knutson is also a familiar area name, though we aren’t certain if G.H. Knutson still has family and relatives in this area.